So, my new Brightness and Contrast pattern is really focused on what I call That Skein. I think most people (well, most knitters!) immediately know what I’m talking about… but let’s take a moment to just revel in the sheer variety and wonderful insanity that That Skein can bring to your knitting. And, at the end, I’ll do a draw for a copy of the pattern!

While I was designing Brightness and Contrast, I already had my gorgeous indigodragonfly yarn in hand — but that didn’t stop me from completely falling down a rabbit-hole of insane-o yarns. 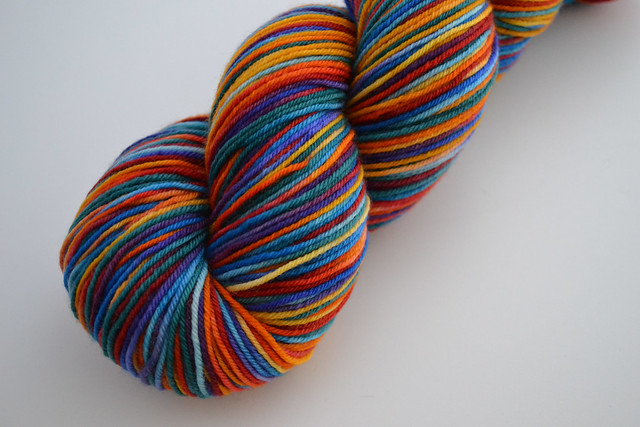 The indigodragonfly yarn is a great embodiment of That Skein-ness — handpainted, strongly coloured, incredibly inviting in the skein, and yet… so challenging to match with a pattern that will do it justice. Sure, you could knit wild socks, but then the awesomeness would be hidden under your shoes and pant legs most of the time! When you’ve got a work of art, which is what I consider That Skein to be, why hide it away?

You may have caught a glimpse of a second Brightness and Contrast shawl (well, more like a prototype) in some of the photos on the pattern page. 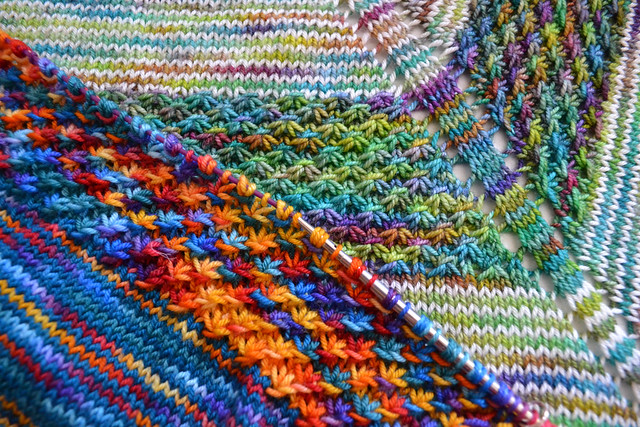 The other shawl uses the same pattern, the same techniques, but it’s a very different result! For one thing, I felt like the multicoloured yarn I was using looked like watercolours, so I used a plain creamy yarn to mimic the effect of paint on paper — rather than picking one shade out of the multicoloured yarn to use as the partner yarn.

Here’s the ‘That Skein’ in question: 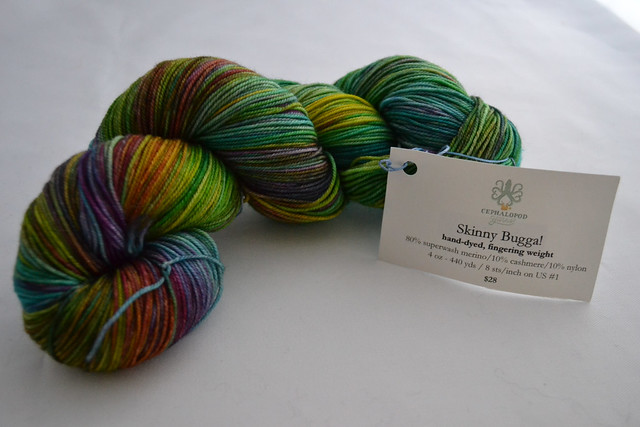 Again, it’s a gorgeous colourway, full of shades that I love (many of them are part of my own colour palette!), but again, I really wrestled with what to knit with it. I traweled around Ravelry looking for things knit in this same colourway, and was saddened to see that the colours, so vivid and lively in the skein, were muddied when combined on the needles. Thankfully, with Brightness and Contrast, I was able to really let the colours sing the way I felt they could!

But you know, although they’re very different yarns, both the indigodragonfly and the Cephalopod skeins above are pretty much rainbows. What other dye techniques, what other colour combinations, would be as challenging to knitters? I set out to explore.

I created a Pinterest board to keep track of my finds.

What about this insanity from Nerd Girl Yarns?

Or this ravishing beauty from Western Sky Knits?

This yarn from Toil and Trouble is much simpler — only two colours! — and yet, it’s no less challenging to find a pattern for. Those blips of colour would be very unpredictable on their own. 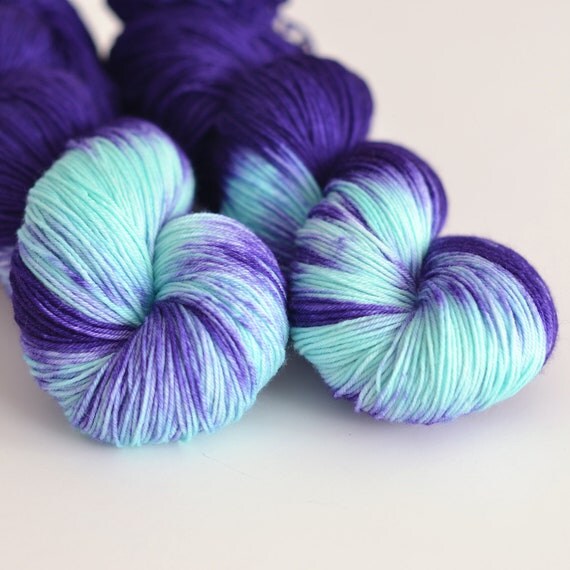 Hecate from Toil and Trouble

Here’s another one from Nerd Girl Yarns that I think represents a huge swath of yarns that could be That Skein: the tribute/fandom yarn. The colours are significant because of their encoded references, but man, can they be difficult to work up!

Many of the colours from Lorna’s Laces and from Blue Moon Fiber Arts embody That Skein to me as well.

Farmhouse from Blue Moon — though virtually ALL of their Multicolor Wave colourways would qualify!

Even handspun yarn can count as That Skein, if the fibre that went into it was mutlicoloured. Oh, the colour runs are much longer, and more liable to knit up as stripes than crazy flashes, but it depends on the spinner’s technique. (Or, in my case, lack of technique.) 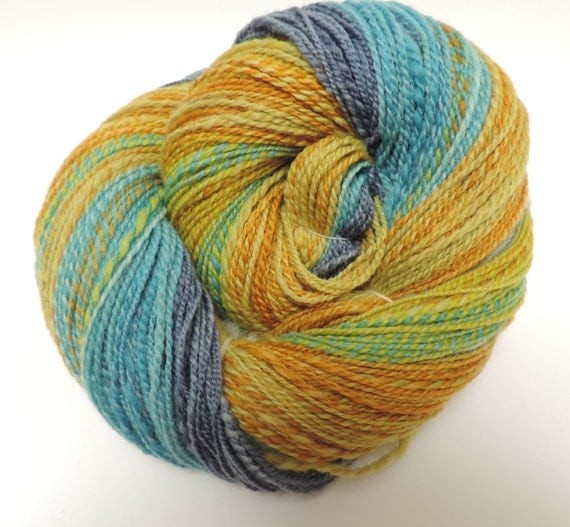 I’ve been thrilled, since I released Brightness and Contrast, by just how many people have leapt on it, saying, ‘Oh! I have the perfect That Skein in my stash!’

So here’s what I’m curious about: what are the treasures in YOUR stash that qualify as That Skein?

The draw will close on Friday, November 7th at 5 PM Eastern time, or as soon thereafter as I get home from work!

7 responses to “That Skein”