The call for submissions for Jane Austen Knits came out last fall, and I was immediately captivated; I have an inordinately geeky soft spot for Jane, specifically, and the Regency period in general. I’d only barely dabbled in design, at that point, but I knew I wanted to at least try to design something for this publication.

My mind initially went to creamy, frothy lace, and I was mulling over shawl design possibilities — which shape? Which stitch patterns? What would make it quintessentially ‘Jane’?

Then, one evening, I was talking to Ms. Robotaday at my local knit night. (You’d never know from her robots that she’s a devoted Janeite too.) We got onto the topic of cameos, which I associate very strongly with the Regency era, and started thinking about colourwork — and then these mittens popped, nearly fully-formed, into my mind.

There’s a very famous silhouette of Jane that is about as iconic an image of her as one can find: I had to fudge a few of the details in the process of translating that into a knitted design. Knit stitches are not only pixellated, they’re little Vs, not squares, so details are easy to lose, and curves go jagged. One moment, her nose was too sharp, the next, her hair in a low bun made her look hunchbacked. I spent a long time with a pencil and eraser… In the end, though, I think (I hope!) that I managed to capture the essence of the silhouette in my version. 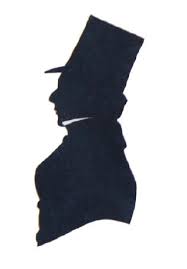 For the lady’s gentleman-companion, I had a bit of a puzzle. I had imagined him in a top hat, but quickly realized that a man in a top hat is, proportionally, a much larger image than a woman with no hat. That is, if I wanted the man to fit into the cameo frame, the lady would appear very small by comparison if she was depicted at the same scale; if I wanted the lady to fill the cameo frame, the man’s hat would never fit. Also, I wanted the man to feel stronger and less delicate, without being too boxy. Again, I hope I managed to strike a reasonable balance with my little gentleman.

For the cable that frames the cameo, I wanted to give the appearance of an unbroken oval. I had Eunny Jang’s Tangled Yoke cardigan in my mind — I wanted the top and bottom of my frame to look as seamless as her cables. However, I added the twist of a two-colour cable, with the contrast colour always over the background colour, to make it really pop. This looks pretty tricksy, but honestly, it’s no more difficult to work than any other cable. (I would not, however, recommend trying to cable without a cable needle at this fine gauge. I used a round toothpick, sanded slightly, as my cable needle — not the most elegant solution, perhaps, but entirely functional.)

Then, there was the question of the background. Ms. Robotaday was instrumental here. She got me onto the trail of dollhouse wallpaper sites, which offer reproduction wallpapers at a very fine scale. Those images helped me settle on the allover diamond pattern with the larger diamonds inset — and also formed the basis of the stripe I used on the thumb.

As for the basic structure of the mittens, I had recently finished making SpillyJane‘s Mystery and Manners mittens for my sister. You might recognize the basic shape — and the extended cuff that I chose to work on those ones, too. The thumbs more or less came from Elliphantom‘s Herringbone Mittens With Poms (pdf link). The thing is, at its heart, any charted pattern is two things: a shaped grid, and the colours that fill in that grid. The SpillyJane mitts gave me the basic shape and proportions, but my gauge was finer, so I had to enlarge the grid somewhat.  The Elliphantom mitts gave me the basic thumb shape I wanted, but again, they were written for a different gauge, so I used the shape but at a different scale.

Comments Off on Inspiration for Chawton Mittens